Located in Fortaleza de Sagres, the Promontory is one of the most mythical places in the history of Portugal, thanks to the role that this coast played in the times of the first voyages of the Discoveries.

In the 15th century, Infante D. Henrique, the Navigator made the Promontory the place of its maritime expansion projects. It is considered a key place in the Age of Discoveries that marked the expansion of European culture, science, exploration and trade, both to the Atlantic and the Mediterranean, and gave European civilization the global projection that defined the modern world.

EDIGMA was the chosen company to implement and coordinate this new museum, designed to lead the visitor to reflect on the unique value of this territory, from antiquity to our days and also increase the notoriety of this national monument, as a cultural reference of the region, the country and the world.

Entering the new exhibition center is to go through the history of the Discoveries, in the fullness of their characteristics, with their benefits, but also with atrocities such as the slave trade.

The narrative of the exhibition is told throughout several rooms, which explore the relationship of discoveries, the sacralization since the end of the world, the experiences of this period and with the space. 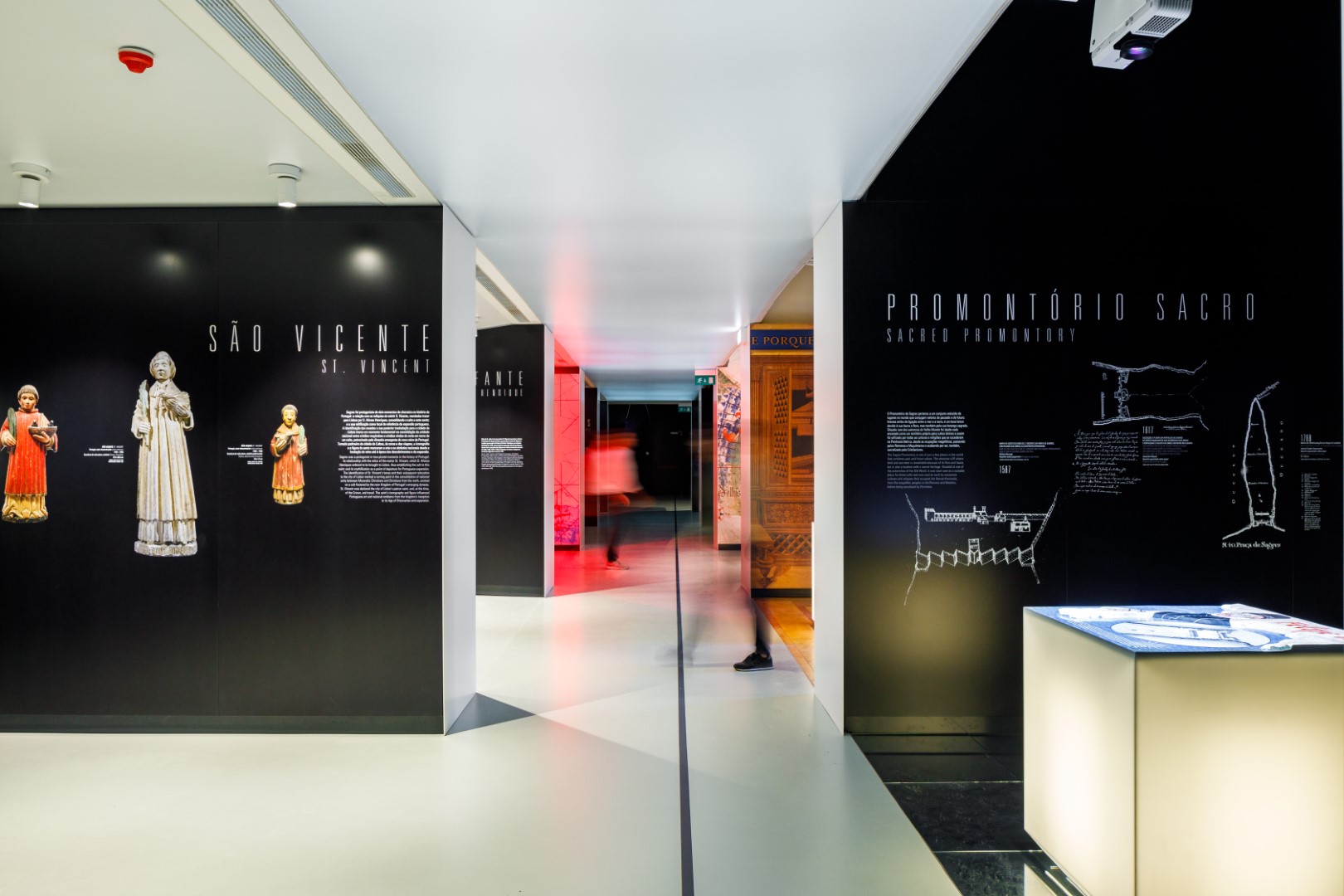 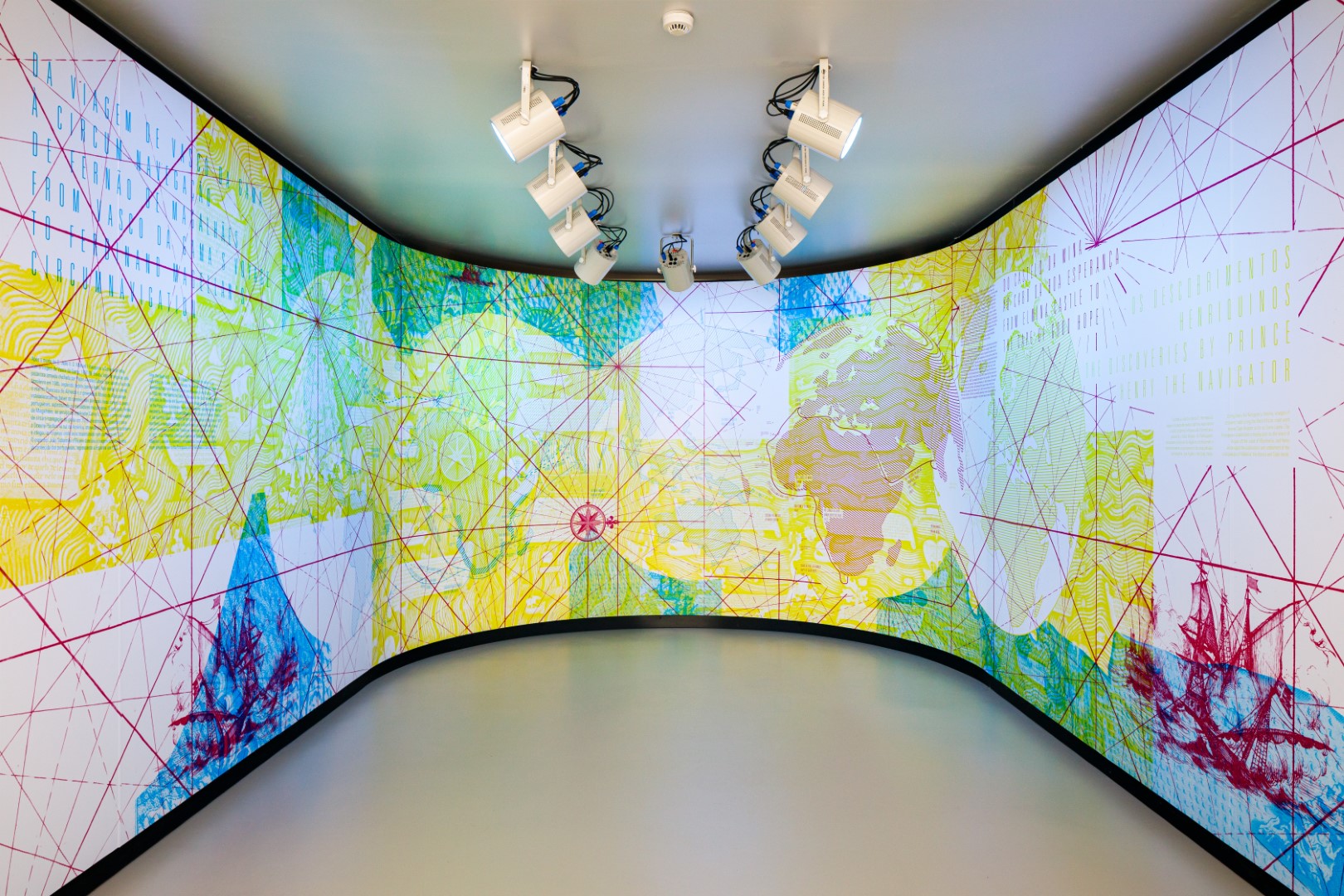 This is a multisensory visit experience, where you can feel, for example a storm or watch some light games. In the room about the trade routes the content is triggered by the projection of light in different shades.

The visit begins with the only piece of the primordial estate, the two-hundred-year-old solid wood door, originally from the 18th-century.

In one room, right in front of another that recreates the basement of a ship, we can see a projection of a painting that depicts the indesanity of a slave ship. 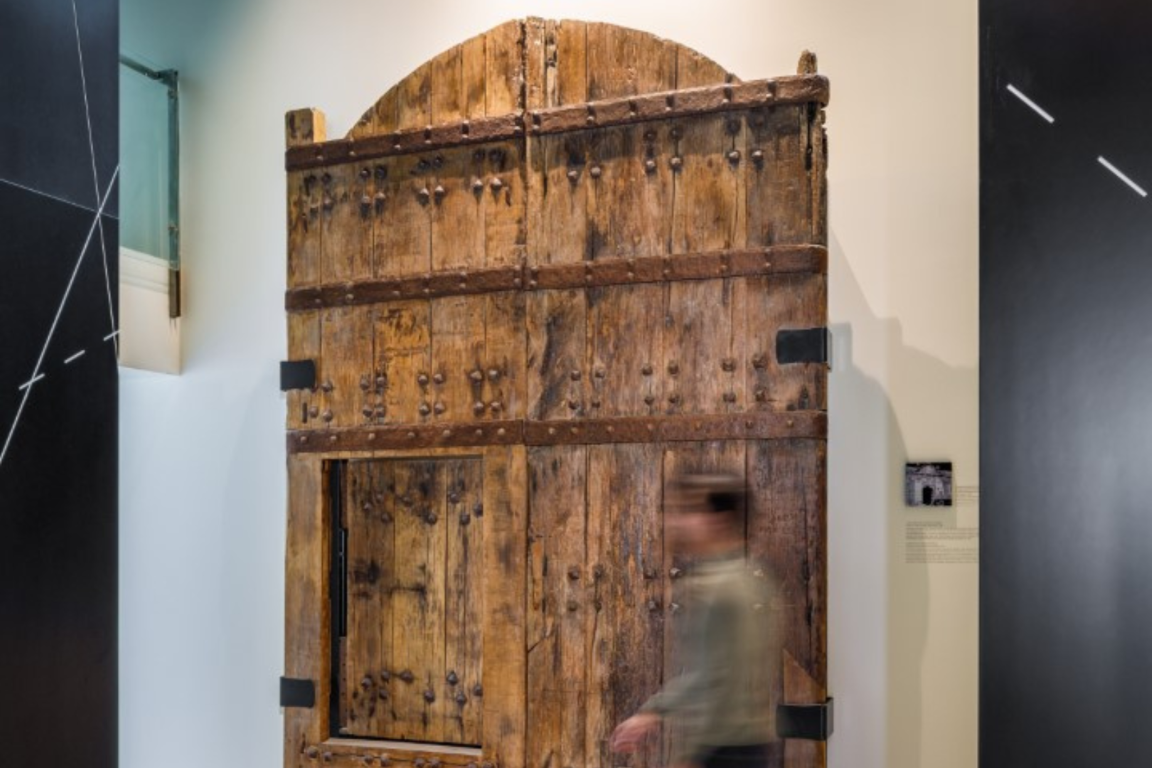 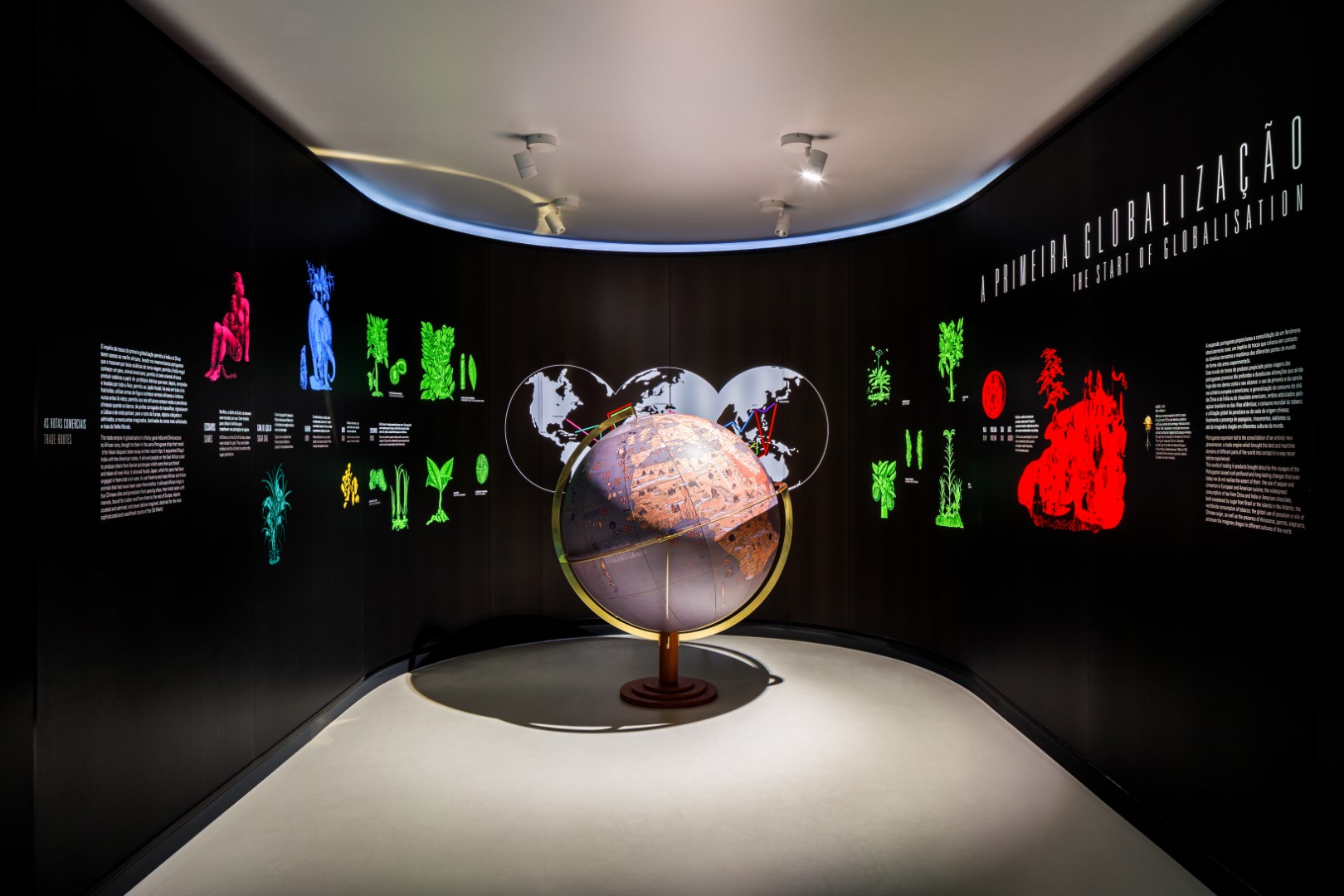 Next door is also a slave collar, borrowed by the Portuguese National Archaeological Museum, a reality that was necessary to assume. As well as a room with a huge globe, spherical representation of the world that shows globalization through trade and evangelization through the dissemination of the Christian faith by the missionaries.

In the assets we can still find, for example, an astrolabe, the caravels, references to the Infante, and also an image of a slave ship.

Studiolo’s room recreates the Infante’s workspace, a reproduction of what was a reflection room of the time. This studio has the maps that was known at the time and those that also came to know. 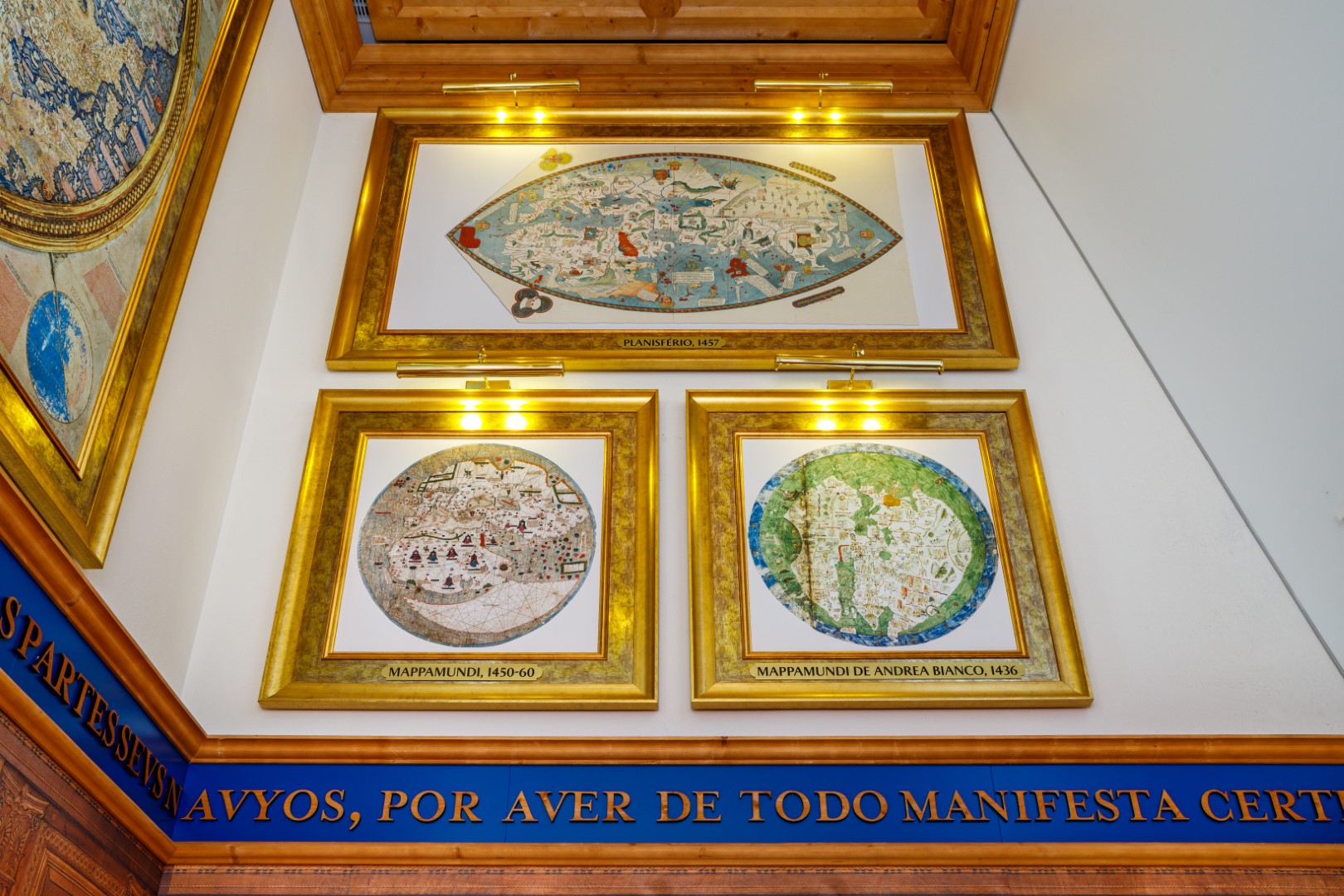 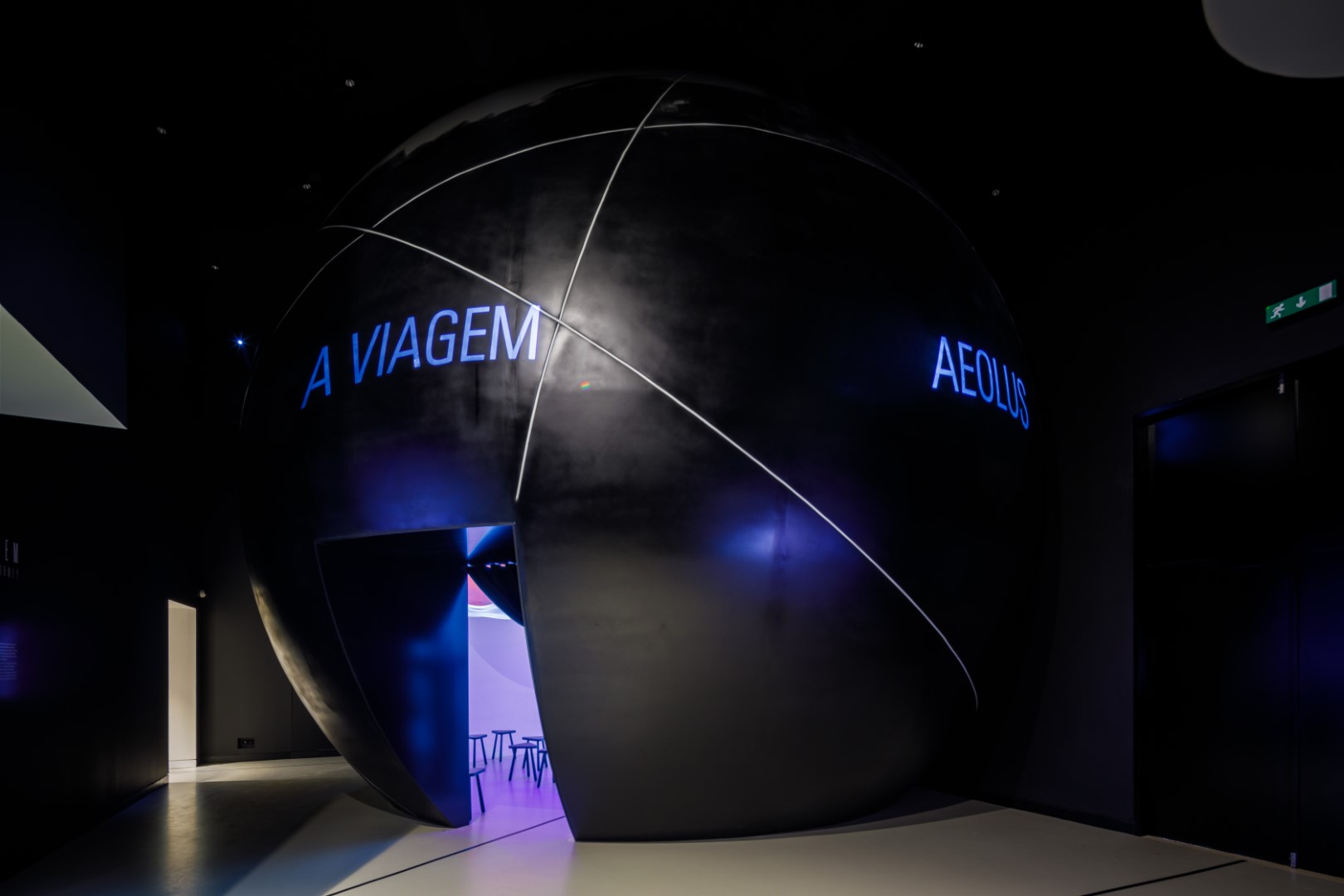 The experience culminates in a room, where a sphere is installed, inviting to the interior where visitors watch a movie about the discoveries.

The first floor was designed to host temporary exhibitions, which provide visitors with new perspectives and looks, either through a more historical content, or through a contemporary look, fostering an attitude of discovery and questioning.

The entire Exhibition Centre has audio guides in different languages.